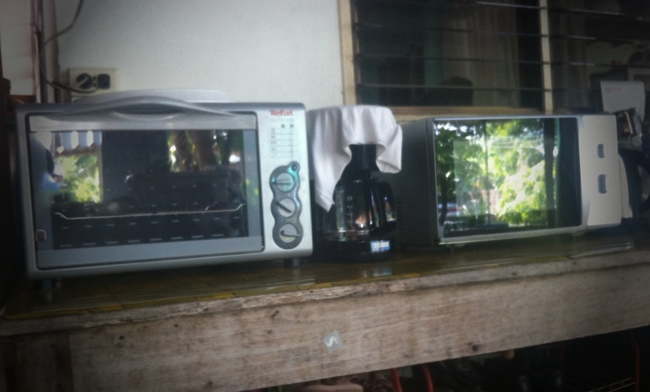 A recent Business Insider article on how tech is the “great equalizer” got me thinking. The effects of technology are all the more profound in Asia, where many of the things that we take for granted in the West are often not available.

This year I’ve taken great satisfaction from watching my mother- and father-in-law continue their increasing adoption of technology. I wrote about this two years ago and things have moved on a fair bit since then.

My in-laws are neither on the breadline nor are they rich, they are middle-class-ish in Central Thailand with a ~$1,000 monthly household income. Six years of drip-drip tech and hand-downs have got us fixing more first world problems than third world problems these days – but I still think looking back on their year in tech is interesting.

For reasons I won’t go into, I introduced my father-in-law to the concept of a VPN on his laptop this year. It is still a work in progress, but the ability to watch Match Of The Day, albeit not subtitled into English, is one major appeal, although he doesn’t use it particularly regularly.

A good friend moved to the US and I agreed to look after his stuff/try to sell it. Getting someone to buy a bulky old printer/scanner isn’t easy, so I stashed it with my in-laws who have put it to use printing out photos of my kids, new menus for my mother-in-law’s shop, and more.

Printers seem like tech 1.0 in the West, where we’ve moved on to 3D printing, but my in-laws are loving the ability to turn digital photos into physical pictures from the comfort of their home. There’s even been talk about offering a photo printing service to people living nearby, which could be a nice little earner.

Bored of having nothing to watch, my father-in-law invested in a local digital TV box without my cajoling. Albeit one with limited programming, it was interesting to observe this decision. I didn’t see him making a year or two ago because they used a semi-legitimate pirate system which is pretty commonplace around their town, but maybe the internet seeded the idea of going beyond terrestrial options?

Another possession I put into storage for my buddy (but I am trying to sell it), the TV has been well received because it is nicely flat (no ugly bulge on the back) and can link up to a PC to project the screen. We’re not into streaming yet, but see below for more on that.

I could scarcely believe it when my in-laws invested in their own smartphones. I was sure their first experience would be a device I bought, but they went out and plonked down $20 a piece for two Android devices from Thai company iMobile.

The phones are not great, there’s no front-facing camera and the RAM is severely limiting, but they can browse the web via WiFi, access Line (see below) and play some games so this is progress. 2015 could be the year for an upgrade.

Now that they have smartphones, both my mother- and father-in-law have accounts on Line, the hugely popular chat app with more than 30 million registered users in Thailand. They have Line accounts but are not on Facebook, which is interesting.

Having them on Line means I can share (they can demand) photos of my kids easily, and we can kind of do video chat, but their phones don’t have front-facing cameras which is a major bummer.

I like to think that this is a sign of both the growing appeal of smartphones, and the social pressure to be on Line. Seemingly all of the family – aunts, uncles, cousins, etc – all have accounts, and my in-laws find it amazing to be able to text and call them for free (when on WiFi).

Believe it or not, many Thai people make do without microwaves. Many even do without fridges – my in-laws do have fridges, but they didn’t have a microwave until I bought one for Christmas.

I figured it would be useful for my mother-in-law’s food shop, which she just re-opened, but it has been a week and I haven’t really seen it used. The jury is still out.

I stumbled across a $30 coffee machine which I bought for my father-in-law. It is getting some serious workouts, being used at least once a day, and has had friends and family all suitably impressed and probably keen to buy their own.

Ever the entrepreneur, my mother-in-law is considering selling coffee from the machine – there are potential profit margins when a bag of ground beans is $3 and few people drink anything but instant coffee – but personally I’m not so sure that will happen such is her focus on food.

I’ve ordered a couple of Chromecasts from the UK and look forward to giving one to my father-in-law. They aren’t on sale in Thailand so we’ve had to enlist my family back home’s support to send it over.

Father-in-law was pretty amazed from watching YouTube reviews just what this small piece of kit is capable of, and I’m fascinated to see how he uses the Chromecast and whether it cuts into his regular TV viewing habits.

The life-changing potential of the Internet in Southeast Asia

Earlier this month I wrote about why I believe Southeast Asia is the world’s most exciting place for tech, although it came about almost by accident. When I sat down to write my annual look at startups to watch out for in Asia, I ended... Continue →